For many of us our pets are members of the family, and we love them. But while they provide us with joy and companionship, they sometimes eat the furniture and pee on our favorite rugs.

It’s those, and other destructive behaviors, that can be frustrating for their owners, as well as costly when damaged items require cleaning, repairing or replacing.

While occasional mishaps pretty much come with the territory when you own a dog or cat, it doesn’t necessarily mean you have to cover the furniture in plastic or give up on having nice things.

Instead, identifying the underlying causes and implementing solutions can help keep reduce the damage to your home and bank account.

What’s Up With Fido?

“If your dog is chewing the couch, it’s because he’s not stimulated. He has too much energy and he’s taking it out somewhere,” explained Dana Humphrey, a pet industry expert known as “The Pet Lady,” based in New York City.

“It could be a puppy, it could be an older dog, but if you find that you come home and your dog is just destroying things, whether it’s the couch or your shoes, basically they need more exercise and it could also be helpful to get them some kind of brain-stimulating activity.”

She said that investing in a treat-dispensing toy can be helpful, along with ensuring that your dog is getting enough active time outside, including walks, runs or basic ball-throwing in the backyard if you’re short on time.

Separation anxiety can be another reason for destructive behavior, according to Allison Cipolli, a dog trainer and supervisor at Camp Canine, a day care, boarding, training, and grooming business in Bristol.

“When the owner leaves, the dog goes through a stress-panic and to comfort themselves they will grab the owner’s belongings and chew, chew, chew.”

To determine if that’s the problem, Cipolli recommends putting out a special treat that your dog rarely gets, then leaving the house for a few minutes before returning.

“If the dog didn’t eat what they normally would while you there,” she said, “that’s usually a telltale sign that they’re going through separation anxiety.”

To alleviate the problem, Cipolli suggests leaving your dog alone in incremental periods, starting with short amounts of time before gradually increasing the time away until the dog adjusts accordingly.

“The other thing, which is the hardest thing to do for any owner or human when it comes to adorable dogs, is ignoring their dog when they get home,” she said.

Greeting your dog with enthusiasm and attention when you walk through the door can sometimes reward and perpetuate the unwanted behavior that occurs while you’re gone.

Instead, Cipolli said that ignoring your dog until they’re less excited, is the best thing you can do.

“Once they’re calm, cool, and collected, go over, greet your dog, and you guys can then go on about your day.”

When it comes to inappropriate voiding, especially in older, potty-trained dogs, a trip to the vet might be in order to rule out any medical issues. If everything checks out, then spite might be the culprit.

“Dogs know what your favorite thing is and if they’re upset with you because maybe you left them alone for a while, or you didn’t spend enough time with them, that’s how they take out their aggression.”

To curb inappropriate voiding, Cipolli recommends reducing your dog’s free range of the house by setting up boundaries and limiting access to the places where the marking is occurring until the unwanted behavior stops.

“It’s not bad if you limit your dog to boundaries when no one’s home, that way if there ever is an issue that arises again, you can shut it back down to one room, versus every room in the house.” 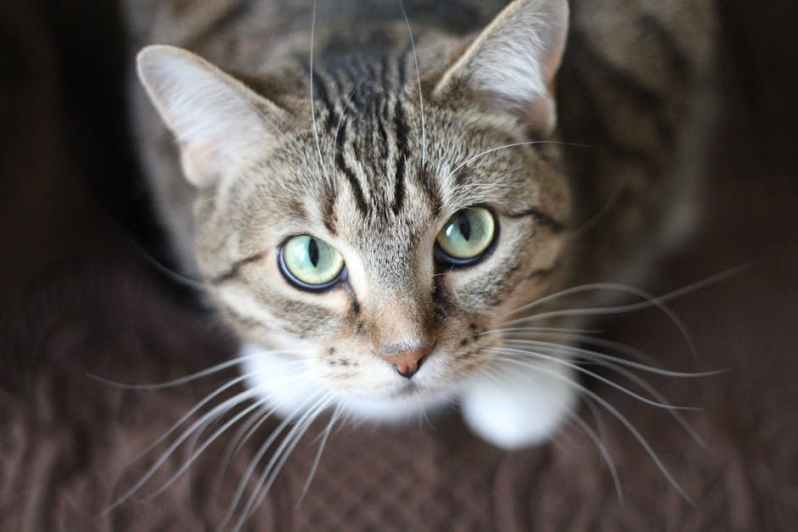 There’s a reason people use the idiom “herding cats” when describing an impossible task; it’s because felines can be, well, impossible.

Independent and willful, they are often challenging to train when it comes to behavior.

Fortunately, that doesn’t mean it can’t be done. Among the biggest complaints of cat owners, is furniture clawing.

“If you find your cat is tearing up your couch or your furniture, there are some products that can help,” said Humphrey. “Things with natural hormones in them that will calm them down.”

Feliway is one option, offering wall diffusers, sprays, and wipes to address scratching and a variety of other behavioral issues. Pet Remedy is another, offering similar products.

Calm Cat sells a Stress-Relief Coat, which cats wear in order to relieve anxiousness or other issues causing behavior problems.

But most important in helping curb unwanted clawing, is having a scratching post or pad.

“Cats need and want to scratch, and we need to provide them with an outlet to do that,” said Humphrey. “If they don’t have any kind of scratching pad, then you’re basically telling them to scratch your furniture.”

If you already have one and your cat isn’t using it, Humphrey said that it could be because it’s not high enough or it’s in the wrong location. She suggests moving it to a different spot in the house, as well as trying several different kinds, including carpet and corrugated cardboard, until you find one that works.

A more difficult problem for many cat parents, is urinating outside the litterbox.

One possible reason, according to Humphrey, is that a single litterbox may not be enough.

“Depending on how many cats you have, you want to have, on average, 1.5 litterboxes per cat. So if you have three cats in your house, don’t have just one litterbox, it’s not enough for them, they need more places to go.”

And even if you have just one cat, Humphrey said that two litterboxes are ideal, depending on your home, and how much space you have.

A noisy or poor location may be another reason why your cat is avoiding the litterbox, as well as the style of litterbox you’re using.

Many of the newer models are covered or are constructed to blend in with furniture. However, Humphrey said that most cats prefer them uncovered, and in a place where they have good visibility.

“Cats do not want to pee in a place where they can’t see above them. They are predators, so they always want to be able to see the whole room around them. So going into a dark cave, where the top is closed, is not natural for them.”

Whether it’s clumping or clay, the litter being used in the box may be causing the problem, and it’s worth switching to another kind to see if it helps.

Finally, anytime a cat starts urinating inappropriately, they should be taken to the vet to rule out urinary tract infections, which are common in cats, along with other possible medical conditions.