Palm trees and tropical landscapes are what most people associate with an island getaway. But as any New Englander will tell you, some of the best island vacations can be found right here; indulging in a little island time requires nothing more than a car ride or ferry ticket.

Located off the coast of Cape Cod, the Vineyard measures nearly 100 square miles, making it the third-largest island on the East Coast.

The picturesque island of 17,000 residents swells to nearly 115,000 on any given day during the summer months with tourists, celebrities and politicians coming to enjoy its considerable attractions. 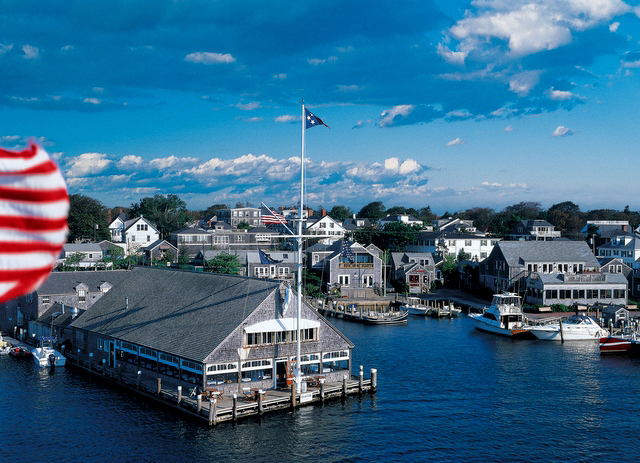 Among them are the island’s endless coastline, 13 public beaches, fine accommodations and amazing foodie scene.

Home to the towns of Vineyard Haven, Oak Bluffs and Edgartown, down-island is far and away the busier and more visited part of the island.

And, much like siblings, each town has its own distinct personality.

Few people, if any, refer to the harbor community officially named “Tisbury” as anything but Vineyard Haven, including the local post office and library. The year-round port of entry into Martha’s Vineyard, it’s a hub of boats, shops, bike rentals and restaurants.

With its close proximity to the ferry drop-off, many day-trippers are content to window-shop along Vineyard Haven’s narrow streets and enjoy a meal at one of the many eateries including the Black Dog Tavern, a Martha’s Vineyard icon.

One town over, Oak Bluffs is effervescent with a good-time vibe.

Kids will want to take a ride on the Flying Horses Carousel, the nation’s oldest platform merry-go-round, near Oak Bluffs Harbor. Grown-ups will likely have a better time at the nearby Lookout Tavern, a casual, back-slapping kind of place serving up sushi along with other pub fare and a good beer selection including the “Masshole,” a mandatory order for anyone from out of state. 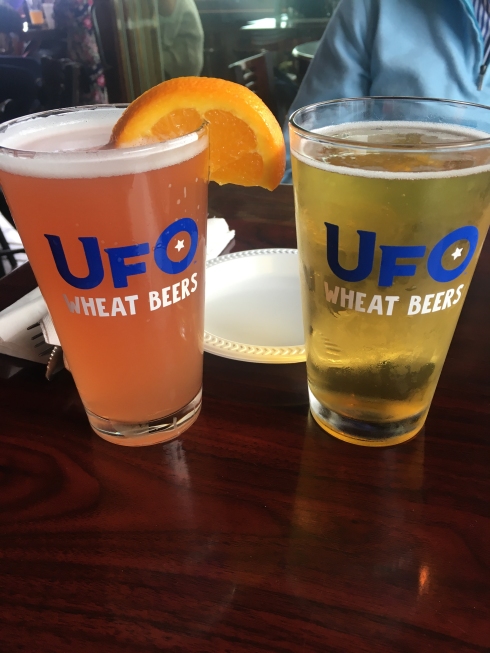 The Masshole at the Lookout Tavern | Photo: S. Lemire

Oak Bluffs is also home to the Red Cat Kitchen, a favorite fine-dining spot for both locals and visitors like former President Barack Obama, who frequents the restaurant when the family is in town. Don’t leave without ordering the signature fried Brussels sprouts. Reservations are a must. 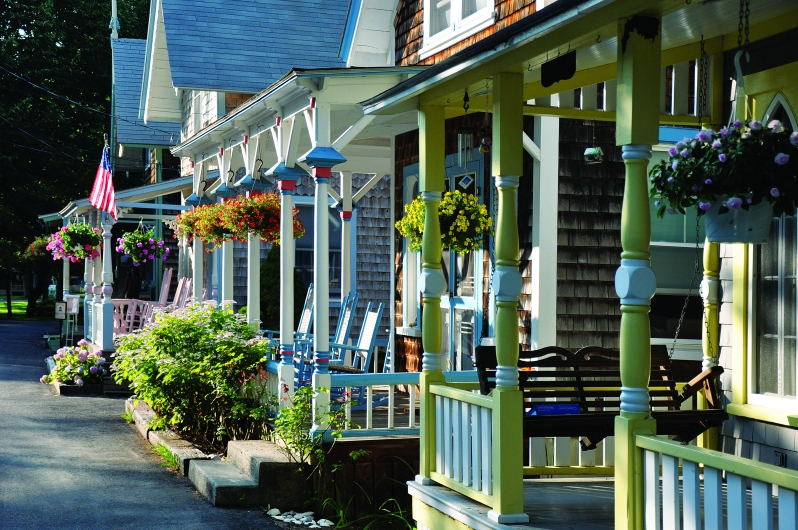 Stately Edgartown completes the down-island trio. A former whaling port, the town is rife with white “Captain’s Homes” and offers a host of upscale boutiques and gift shops.

One of the primary filming locations of the blockbuster “Jaws,” visitors can, ahem, hunt down various “Amity” sites in Edgartown including Keisel’s Bicycle Rental, Amity Hardware and the infamous “Jaws Bridge,” which no one is allowed to jump from, but everyone does anyway.

Also in Edgartown is the tiny peninsula of Chappaquiddick (“Chappy” to those in the know).

Despite being famous for all the wrong reasons, Chappy is popular for its beaches, nature reserves and vacation rentals.

Plenty of visitors come just to take the old-timey ferry across the channel and back, which takes only a few minutes and costs $4 round trip.

It also provides a great view of the Edgartown Lighthouse, one of five on the island. 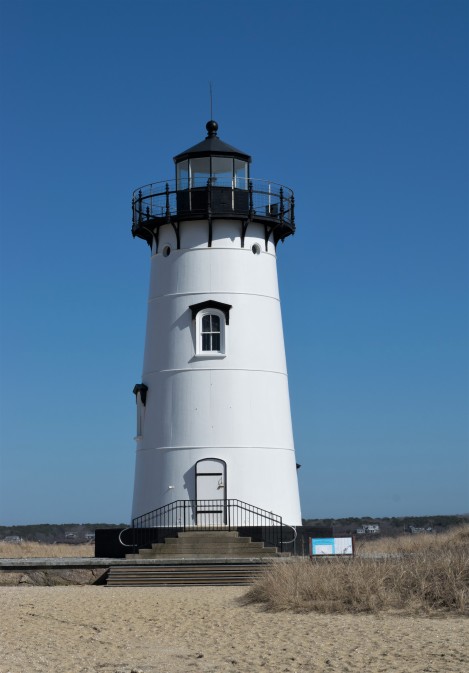 Far less populated, up-island — encompassing the towns of Aquinnah, West Tisbury and Chilmark — is equally worth exploring especially if you rent a car or jeep and head to Aquinnah, located at the tip of the island.

The Aquinnah Cliffs (also known as Gay Head Clay Cliffs) are well-worth the drive for panoramic views of the ocean and to get a look at the Aquinnah Lighthouse. 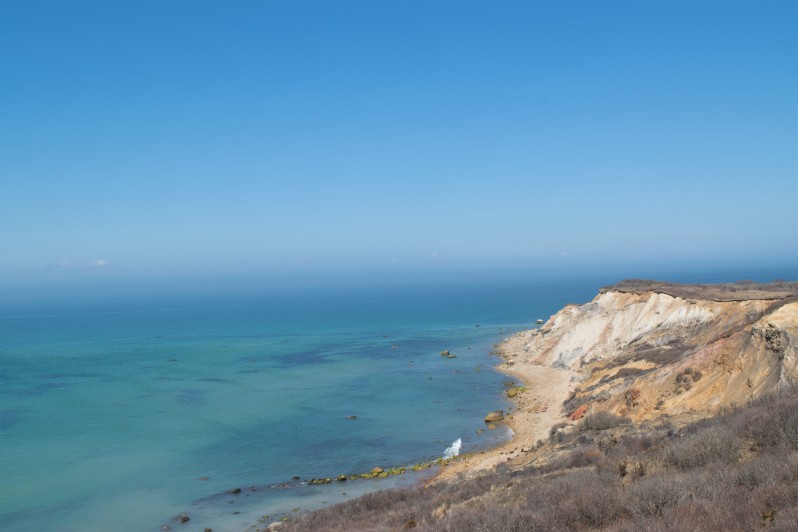 Larsen’s Fish Market, open seasonally in Chilmark, is a fan favorite for fresh seafood. It’s available only for purchase or take-out, so folks often take their food and enjoy it on the dock overlooking the boats.

During high season, ferries sail to the Vineyard from Falmouth, Hyannis, Nantucket and New Bedford, Massachusetts, as well as from Quonset Point, Rhode Island, and metropolitan New York.

The Steamship Authority is the only year-round ferry, and the only one to offer auto transport with advanced reservations strongly advised.

However most people agree that because of traffic and limited parking, leaving your car behind is probably best. There’s plenty of transportation on the island, including the Martha’s Vineyard Regional Transit Authority bus system along with taxis, Ubers and bike and car rentals.

Flights to the island are also available on Cape Air and seasonally on Delta and JetBlue.

An island, town and county all in one, Nantucket is 30 miles southeast off the coast of Massachusetts.

Dubbed “Nanaticut” by the Wampanoag natives, which loosely translates into “that faraway island” (completely valid), getting there definitely takes some work, but the payoff is miles of pristine coastline, rose-covered cottages and exclusive atmosphere.

Considerably smaller than Martha’s Vineyard, Nantucket covers about 14 by 3.5 miles and is the kind of place that New England clichés are made of.

Once the biggest whaling seaport in the world, Nantucket profited tremendously from its years in the industry. That prosperity can be felt throughout the island and seen in the elegant and well-preserved structures that remain from those whaling days. With more than 800 still standing, Nantucket is a designated National Historic District.

Four ferry lines provide service to the island. The Steamship Authority (the only service to provide transport for passengers and cars), departs from Hyannis, Mass., and takes a little over two hours. From April through New Year’s Day it also operates a high-speed, passenger-only ferry that takes an hour.

Hy Line Cruises also ferries passengers from Hyannis to Nantucket in about an hour, as well as operating a ferry between Martha’s Vineyard and Nantucket (one hour), making it possible to do a two-for-one in a single weekend.

SeaStreak and Freedom Cruise Line round out the other two options, with ferries operating out of New Jersey, New York, and New Bedford and Harwich Port, Mass.

With 23 beaches it’s a given that visiting the island will undoubtedly include some toes-in-sand time. However, there are also plenty of other things to see and do including Nantucket’s Whaling Museum.

Housed in a former candle factory, the renowned museum features 11 galleries, films and thousands of artifacts related to the island’s whaling history. Appealing to all ages, the museum is considered one of the island’s must-see attractions.

Because of Nantucket’s small size and summer crowding, it’s probably best to leave your car in the ferry parking lot. Instead bring a bike or rent one on the island and take advantage of more than 32 miles of bike paths that range from the meandering Surfside, an easy, 2-mile path, to Polpis, an 8-mile ride that’s moderately hilly and the longest on the island.

Wildlife and scenic views can be found at the Coskata-Coatue Wildlife Refuge, which offers more than 16 miles of trails and sand roads, many with water views. Deer and birds can be found along the trails, as well as the charming Great Point Lighthouse, still in operation.

If you’ve ever been curious about where your Thanksgiving cranberries come from, visit Milestone Cranberry Bog. Situated near the center of the island, the commercial farm still cultivates several varieties of the tiny fruit, producing up to 2 million pounds, which are shipped off and used for various products like juice, sauce and relish.

Finally, there’s no shortage of fine dining and upscale boutiques on the island. Among them is Murray’s Toggery Shop, a local institution for nearly 75 years.

Though the retailer is popular for supplying various essentials like shoes and weather gear, what Murray’s is best known for is its Nantucket Reds clothing line. Originators of the brick-colored apparel frequently associated with Nantucket, it’s worth a stop just to say you’ve been there, and to pick up a pair of those red shorts you’ve always wanted.

Other Islands To Explore

After Martha’s Vineyard and Nantucket, Block Island is one of the most popular New England islands.

At just 38 square miles, it’s small, but what it lacks in size, Block Island makes up for in easy-going, island charm; it’s a popular destination for vacationers and day-trippers alike.

Victorian-style inns, quaint shops and 360-degree ocean views all contribute to its appeal, along with its easy ferry commute from either Point Judith, R.I., or New London.

More than 3,000 islands sit along Maine’s rocky coastline, most of which are uninhabited or owned by government agencies. However, several notable islands include Mount Desert Island (home of Bar Harbor and Acadia National Park) and Vinalhaven.

Providing daily ferry service, the Maine State Ferry carries passengers back and forth between Rockland and Vinalhaven, taking roughly an hour and 15 minutes.

Lodging is limited to one hotel (The Tidewater) and activities include kayaking, hiking or visiting the several nature preserves located on the island.

South of Vinalhaven is Monhegan. An artist’s colony for more than 100 years, Monhegan has no paved roads or cars and is merely a square mile in area.

It is, however, a popular tourist destination for those seeking solace and one-of-a-kind art. The Island is home to several galleries and some of the local artists offer viewing hours in their studios.

Just a 17-minute ferry ride from Portland, Peaks Island was once home to amusement parks and theaters. While those days are long gone, it remains a popular day trip for folks in the area.

There’s not much to do, but visitors still go anyway to walk the island, bird-watch and enjoy its abundant water views.

Cottages are available to rent and there is a spattering of restaurants and businesses.

Most people either visit one of the island’s public beaches (Sandy, Cairn or Centennial) or walk the 3.7 mile loop that passes a former World War II gun battery, now on the National Register of Historic Places.

Casco Bay Lines runs daily ferries to and from the island out of Portland.

Closer to home, in Connecticut’s Long Island Sound, the Thimble Islands (or “The Thimbles”) make for a relaxed day trip that includes scenic views, luxury homes and wildlife.

A collection of 25 small islands set off the coast of Branford, the best and only way to see them is to take a boat tour.

Three companies operate seasonal cruises (May through Columbus Day) around the islands; all departing from the town dock in Stony Creek.

Captain Mike and sons Justin and Bryan take guests on a 45-minute cruise aboard the vessel, Sea Mist.