At first it looks completely ordinary, nothing you’ve haven’t seen a million times before.

It’s smooth, dark and a little drippy, especially when temperatures are on the rise. But once it passes your lips you can hardly believe the euphoria; it totally exceeds all your expectations.

Bom chicka wah, wah. You get the drift? That’s right. It’s a Pimp. A Salty Pimp.

If it all sounds deliciously pornographic, it is. In fact, it’s downright naughty. But when it comes to ice cream, it’s better to laugh with the sinners then cry with the saints.

Earning dozens of awards, USA TODAY named it best ice cream parlor in the U.S. and the fifth best in the world in 2013.

Started by Bryan Petroff and Douglas Quint as a food truck ten years ago, Big Gay Ice Cream now has four brick and mortar locations, three in New York City and one in Philly.

You know you’ve arrived when you spot the ginormous rainbow ice cream cone in the window and once inside, you can’t help but smirk at the quirky, tongue-in-cheek humor.

Among the amusing accoutrements, a poster on the wall provides instructions on how to assist a choking victim, including helpful illustrations of Bea Arthur giving a unicorn the Heimlich Maneuver.

And the ice cream names are positively inspired. 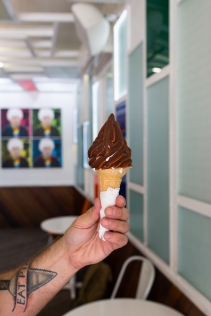 The “Dorothy” is vanilla soft-serve covered in crushed Nilla Wafers that leaves ‘a trail behind (and on) you like one of Maude’s long in-the-back vests.’

The “Truckers” ice cream sandwiches include the “Sally V,” and “Society Dame,” which is described as bourbon butterscotch ice cream ‘wearing a choker of white nonpareil pearls.’

But it’s the “Salty Pimp” that should be on your short-order, bucket list.

More addicting than “Stranger Things,” it looks like a simple dip cone, when it’s anything but.

Beneath a shell of salty dark chocolate is vanilla soft serve injected with luscious dulce de leche. It’s positively dreamy, like, for real.

Quint explains that the Salty Pimp was created after he experimented with injecting dulce de leche into the middle of vanilla ice cream.

“It worked,” he said. “I added some more dulce de leche to the outside of the ice cream, then sprinkled it with sea salt and served the nameless cone to pleased customers.”

But the pièce de résistance came when a repeat customer suggested Quint dunk the whole thing in chocolate.

“I wasn’t supposed to tamper with the dip, but I caved in,” Quint said.

And once he did, there was no going back. “He and I both started laughing. It was great.”

The customer then said to Quint, “If you’re going to pimp your cone you gotta do the dip,” and voila, a star was born (the Lady Gaga, Bradley Cooper version, of course).

“Thus, the Salty Pimp,” said Quint. “Because it was salty [and] pimp, because it was the most complicated item we had made to date.”

Since its inception in September of 2009, Quint says they’ve sold ‘well over a jillion’ of the cones, which has been featured in countless articles, as well as the television show, “The Best Thing I Ever Ate.”

So, there you go.

A tale of lust and culinary genius, as well as a legitimate excuse for a field trip to New York (as if one is ever needed).