There ought to be a sign taped to the door of Song, West Hartford warning patrons to run while they still can.

It wouldn’t be great for business, which probably explains why they haven’t done it yet.

But it seems only fair considering that dining there can spontaneously cause obsessive thoughts, breathless desire, and the compulsive need to return again. And then again, and then…

Well, you kinda get it.

Like binging on Season One of “Mindhunter,” you almost can’t help yourself because it’s just so freaking good.

Also, Cameron Britton does an awesome Ed Kemper, right? He was nominated for an Emmy in 2018 but lost to Ron Cephas Jones. Britton isn’t even in Season Two. Well, maybe one episode. Like, the fifth one.

Even without him, it’s still pretty good because, Charles Manson. And that whole deal with Tench’s son? Yikes.

Anyway, what’s that got to do with food? Nothing. 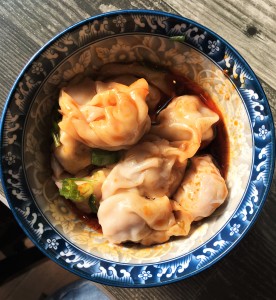 The Chengdu and Seven Flavor.

Colorfully sweet (but not too much) and floating in a red chili pepper sauce, the pork-filled Chengdu Wonton is beyond flavorful and highly-addicting. Though it won’t burn a hole through your esophagus, it’s spicy enough to leave your mouth pleasantly heated, almost to the point of breaking a sweat, but not quite, which is honestly how it should be.

The Seven Flavor Wonton, also pork-filled, skews in the peanut direction and swims in a similar spicy chili sauce that will leave your mouth tingly long after your done, but not at all in a bad way. It’s rich, warm and intoxicating, making you want to get another ready on deck before you’ve finished chewing the first one.

Depending on your preference you’ll probably want to order one or the other, but don’t be afraid to order both, because decadence is perfectly fine when it comes to wontons done well, and also, why not? At $7 a shot, they’ll hardly break the bank and you certainly won’t be sorry in either case.

Even though we’re talking about wontons with a little “Mindhunter” thrown in, it would be positively immoral (sort of like using a black Sharpie to predict the path of a hurricane) not to mention a few other highlights on the menu.

The Scallion Pancake with Sliced Beef is a mighty fine choice with its flakey pastry shell and flavor-packed sliced beef all cuddled up and delicious on the inside.

The Dan Dan Noodle (which arguably should be renamed, Damn, Damn Noodle because it’s so damn good) is another contender. With noodles, greens, and pork mixed together tableside, it’s hot and sexy with just a hint of peanut in the sauce. 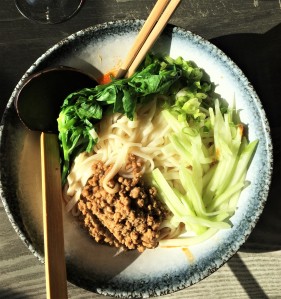 Finally, do not even think about leaving without ordering the Steamed Pork Buns. The positively delicious buns practically burst open in your mouth, filling it with the rich broth hiding inside.

Why are you still reading this?

Make some dinner plans. If you go early enough, there’ll be plenty of time to get home and finish up Season Two.

Song is located at 74 Lasalle Road in West Hartford. Dine-in and carry-out. For hours and more information visit www.songwesthartford.com.